Politicians, Royal Family members and veterans will commemorate those who lost their lives in conflict later as the UK marks Remembrance Sunday.

A two-minute silence will be held across the country at 11:00 GMT.

Boris Johnson, Jeremy Corbyn and Jo Swinson will break away from the election campaign to attend the annual ceremony at the Cenotaph in London.

Prince Charles will lay a wreath during the service on behalf of the Queen, who will watch from a balcony.

Starting at the same time as the two-minute silence, the service at the Cenotaph will honour the Armed Forces community, the British and Commonwealth veterans, the Allies that fought alongside the UK and the civilian servicemen and women involved in the two World Wars and later conflicts.

Following the service, up to 10,000 war veterans will march in a slow procession past the war memorial.

World War Two veteran Ron Freer, 104, who is blind, will be the oldest marching at the Cenotaph this year.

The Remembrance Sunday commemorations always hold "special significance" for him because his father was killed in 1918 and is buried at Dernancourt Communal Cemetery in the Somme, France, according to Blind Veterans UK. 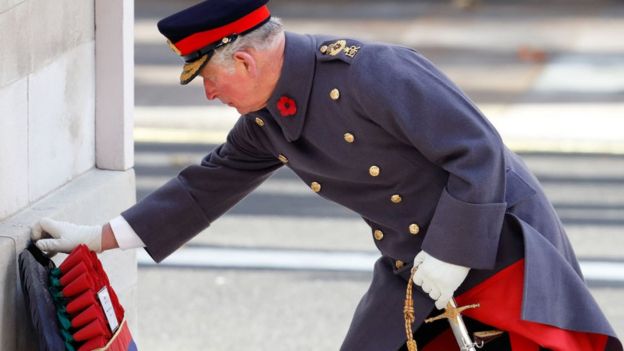 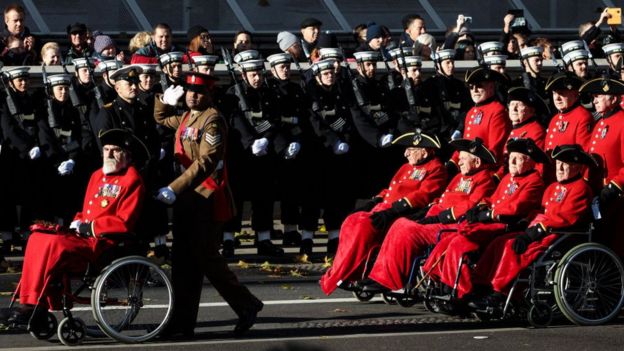 Mr Johnson said he would be "proud" to lay his first wreath at the Cenotaph as prime minister, and vowed to continue to "champion those who serve today with such bravery in our military".

Labour leader Mr Corbyn said in a video message that many serving personnel, veterans and their families were "not getting the support they deserve".

And Liberal Democrat leader Ms Swinson said people should pause to reflect and remember how "fragile" peace can be.

The trio will be joined by the SNP's Westminster leader Ian Blackford and the DUP's Nigel Dodds.

Elsewhere, Scotland's First Minister Nicola Sturgeon will lay a wreath at the Stone of Remembrance at Edinburgh City Chambers before giving a reading at the service at St Giles' Cathedral.

This year marks 100 years since the first two-minute silence was observed on Armistice Day, 11 November 1919.

The Royal British Legion has urged the nation to pause their daily activities to join in the act of remembrance on Sunday. 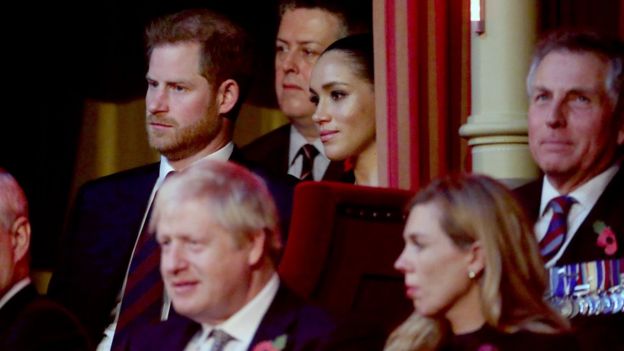 Members of the Royal Family have already attended Remembrance events this week.

Prince Harry, Meghan, Prince William and Kate joined the Queen at London's Royal Albert Hall on Saturday for the Festival of Remembrance.

It was their first appearance as a group since Harry and Meghan said they were struggling with public life.

Miss Universe 2019: 'May every little girl see their faces reflected in mine